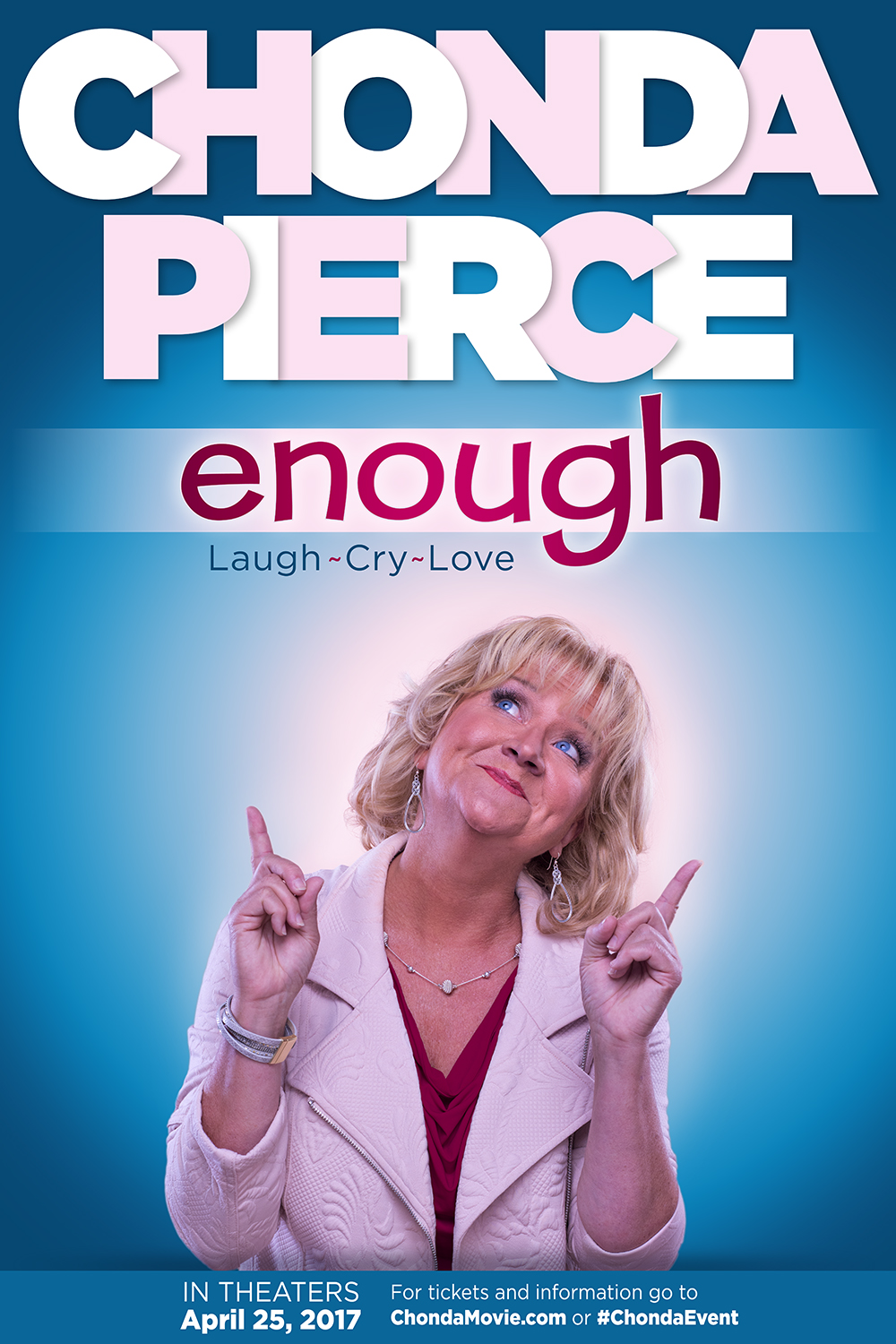 NASHVILLE, Tenn.—Following her successful 2015 cinema event, “Laughing in the Dark,” best-selling comedian Chonda Pierce returns to the big screen for one special night with an important message for audiences nationwide: Laugh – Cry – Love. “Chonda Pierce: Enough” serves as a powerful reminder that our value is found in Christ; because of Him, we are enough.

Tickets for “Chonda Pierce: Enough” can be purchased online beginning Friday, February 17, 2017 by visiting FathomEvents.com or at participating theater box offices. Fans throughout the U.S. will be able to enjoy the event in nearly 750 select movie theaters. For a complete list of theater locations visit FathomEvents.com (theaters and participants are subject to change).

“This event is a hilarious journey to show how far you can come after dealing with life’s lessons,” Pierce said. “You’ll get to learn some new things about me that weren’t revealed in ‘Laughing in the Dark,’ from insights into the dating scene to some hilarious times spent with some childhood girlfriends.”

America’s best-selling female comedian of all time, Pierce continues to overcome obstacles through her faith, humor and the support of her community. Beginning two years after the death of her husband, “Enough” explores Pierce’s ongoing path to healing, highlighting the importance of friendship. “Enough” is a passionate, heartening and funny call to connect with those who love you the most.

“Fathom is thrilled to partner with Chonda for the second time to bring her empowering and emotional story to movie theaters,” Fathom Events Vice President of Programming Kymberli Frueh said. “’Laughing in the Dark’ left a lasting mark on audiences, and we expect nothing less from ‘Enough.’”

“Chonda really connects with the pressure women are under to be perfect,” producer Kent Songer said. “In ‘Enough,’ Chonda is funny, real and once again rallies women to embrace their uniqueness and feel satisfied and confident during any of life’s challenges.”

About Chonda Pierce
A stand-up comedian, television hostess, author and actress, Chonda Pierce has been making people laugh for more than two decades with her winning combination of fierce wit and southern charm. The Recording Industry Association of America’s (RIAA) best-selling female comedian of all time, Pierce has six Platinum DVDs, three Gold DVDs and five Daytime Emmy® Award nominations to her credit and is ranked among Pollstar’s top-selling live performers. For further information, visit chonda.org.

About Fathom Events
Fathom Events is recognized as the leading domestic distributor of event cinema with participating affiliate theaters in all 100 of the top Designated Market Areas®, and ranks as one of the largest overall distributors of content to movie theaters. Owned by AMC Entertainment Inc. (NYSE: AMC), Cinemark Holdings, Inc. (NYSE: CNK) and Regal Entertainment Group (NYSE: RGC) (known collectively as AC JV, LLC), Fathom Events offers a variety of one-of-a-kind entertainment events such as live, high-definition performances of the Metropolitan Opera, dance and theatre productions like the Bolshoi Ballet and National Theatre Live, sporting events like Copa America Centenario, concerts with artists like Michael Bublé, Rush and Mötley Crüe, the yearlong TCM Big Screen Classics film series and inspirational events such as To Joey With Love and Kirk Cameron’s Revive US. Fathom Events takes audiences behind the scenes and offers unique extras including audience Q&As, backstage footage and interviews with cast and crew, creating the ultimate VIP experience. Fathom Events’ live digital broadcast network (“DBN”) is the largest cinema broadcast network in North America, bringing live and pre-recorded events to 896 locations and 1,383 screens in 181 DMAs (including all of the top 50). For more information, visit FathomEvents.com.

About Fuseic Entertainment
Director Rick Altizer and Producer Kent Songer launched Fuseic Entertainment in 2002 as a developer of proprietary music, animation and film projects that encourage, edify and strengthen faith and belief for individuals and families.